I admit I’m not the most positive guy in the world, yet I’m not the most cynical, either. However, I recently had a moment of clarity that hit me like a bolt of lightening. It took me by surprise. The conversation started out innocently enough but took a turn for the worse. It didn’t reach a level of animosity or tension just an uncomfortable inward acknowledgement (to myself) that I no longer wanted to be in the conversation. And what was unfolding before my very ears was negative rain on an innocent accomplishment by precious kids – the Little League World Series US team – Jackie Robinson West All-Stars. 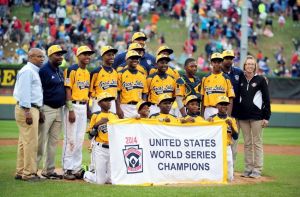 For those of you out of the loop – Chicago’s own JRW team won the right to represent the US in the title game against South Korea. JRW lost in the title game but the story spread for a couple of weeks as the team made an impact on the city of Chicago and presumably across the nation. It was uplifting to see these innocent 13 year olds compete. The city needed a feel-good story given all of the violence surrounding it and the JRW team was comprised of some kids from the same neighborhoods experiencing the violence. There were other positive stories that surfaced in the aftermath and kept the city buzzing. (JRW T-Shirt Sales by Dick’s Sporting Goods) Thus, the jubilation and attention given the story.

However, there were individuals that were not so excited to hear the story. Other individuals just grew tired of the attention. Whatever the case there were people out there that became annoyed with the limelight these kids were experiencing.

And this is when I thought, “Really? We can’t celebrate this great accomplishment from these kids and put a positive meaning behind it?”

Maybe that’s what’s wrong with the world – the truly magnificent accomplishments get lost because of the commercialization process that takes place. And other not-so-magnificent stories rise to the top because of the sensationalism attached to them. It might be time to right the wrongs.

I for one was pretty happy to see the accomplishment – even as it took off to unprecedented levels here in my fair city. It was refreshing to hear news of this feat and how the kids became temporary celebrities. The smiles on their faces was priceless and the air across the city was captivating.

We should all have moments where we can latch onto the good. Take a look around and observe your surroundings. Eye a good story and cherish it. Focus on those positive situations and relish in their aura. Many of us don’t take the time to do this as much as we should. Some of us will even accentuate the negative before pointing out the positive. If you are one of those type of people do us all a favor and keep your negative thoughts to yourself. Let the rest of us enjoy our parades.